1. Around the world and back again.

The sunflower is a native North American flower. Traditionally, the sunflower was used by Native Americans for it's oils, making bread and ointments, and used for their medicinal purposes. The popularity of the sunflowers begins when Spanish explorers brought the sunflower back to Europe. As the flower spread throughout continent, the sunflower eventually landed on Russian soil.  Once it arrived in Russia, The Russian Orthodox Church allowed sunflowers to be utilized during Lent as a food item, when others were forbidden. In the 19th century, government research programs began breeding Sunflowers for both its oil production and human consumption. By this time, there was widespread commercialization in Russia, and by the turn of the century, Russian sunflower seeds landing on the shores of North America because of their high oil content. Around the 1920’s the first U.S. commercial sunflower crop was born. 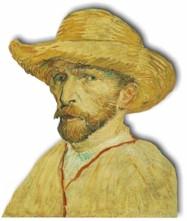 Dutch painter Vincent Van Gogh created two series of still life paintings featuring sunflowers. Vincent van Gogh's Sunflower paintings have been remade over the years by many artists. The sunflowers collection has been reproduced on everything from stationery to coffee mugs. The sunflowers series is one of Van Gogh’s most famous works, which is ironic since at first, nobody wanted them. In his previous work, sunflowers could be found occasionally in his landscape paintings. However, at the peak of summer, his interest in flowers took over. His brother Theo informed their mother that Van Gogh had been receiving fresh flower deliveries weekly.  In 1887 he  became obsessed with the Fibonacci spiral that could be found by seeds of the sunflower.

3. Sunflowers give toxins a "One-Two Punch"

Sunflowers have be used to remove toxins such as lead from contaminated soil. In the past, sunflowers were used to help remove toxins from Chernobyl nuclear disaster and more recently, after the Fukushima nuclear meltdown caused after an earthquake and tsunami on March 11, 2011.

Ukraine's national flower is the sunflower. In Ukrainian folklore, there is a belief that the sunflower is a symbol of fertility, as well as unity.

Ukrainians believe that sunflowers look toward the sky for hope and well being, and at night, drop their heads to reflect on their lives. The sunflower can be found all over Ukraine. The flower is a symbol of pride, and in the summer, sunflowers can be found as far as the eye can see.

While tulips are known to be mid-season spring flowers, sunflowers are best planted when the ground is warm, just at the start of spring. Sunflowers are known to be one of the fastest growing plants. The stem of a sunflower can grow up to 3 m (10 ft) tall, and the flower head can be whopping 30 cm (11.8 in) wide. One man has defied the average sunflower growth rate. Hans-Peter Schiffer was awarded the Guinness World Record for tallest sunflower in 2009, 2012, 2013, and broke his records with a huge 9.17 meter (30 feet 1 inch) plant in 2014.

Just added to your cart: